Hidden Gluten in our Medication ~ 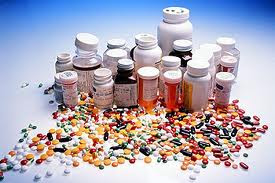 On a bright and sunny day this week I ventured out for my usual 45 minute jog. Feeling an extra spring in my step on this particular morning, due to some good news around a business venture, I was about three minutes into my run and moving at a fairly swift pace. Birds chirping around me and not even hearing the cars passing me on the street a foot away, I smiled and took my next step...then, as if I was plunged into a slow-motion reenactment of a Saturday Night Live skit...I felt my right toe trip on a raised portion of the sidewalk and suddenly I was ffflllyyyiiinnnggg. Not flying in a graceful, majestic way as the birds above me but more like a comedy of errors...as my momentum threw me forward my limbs were trying to reorganize, sparing me from the harsh landing that was inevitable. It all happened so quickly that it literally took me ten seconds to recognize that I was on the ground, facing the opposite direction I had just been running. Once I assessed that all of my limbs were still attached, head not injured and nothing seemed to be broken, I then heard cars slowing down to either assess the damage or laugh at me. Not sure which...didn't care. Then a kind bicyclist arrived to see if I was okay and did I need any assistance. I think once he noticed the large and gaping wounds bleeding on my knees and left wrist he was more compelled to say, "I live close by and can help you." Being the stubborn and tough Basque woman that I am, I kindly declined his offer...a bit out of embarrassment and then just wanting to flee before the tears started rolling down my cheeks. Might sound silly...but damn, it hurt!

I wish this story of my injured self was wrapped around the tale of a killer mountain bike accident as I descended 8,000 feet off Mt. Baldy (like last week, coming down without a scratch) or from a hike in Yosemite that went very wrong...or even a horseback riding accident...I've had a million of those. Nope. All of this pain and now bandaged body parts was the result of a simple misstep...a trip, and consequently, a trip to the old doctor's office. Initially, I was determined that I'd be just fine after having consulted with a pharmacist (who knew nothing I now realize), cleaning the wounds with hydrogen peroxide (biting-bullet proved necessary for this part), applying the appropriate topical treatments, and bandaging everything up. The next morning however, it became evident that I was sorely mistaken and hated to admit that yes, my mother was right! So, after spending half of my day at the urgent care and being told "you must go on antibiotics for these injuries to avoid any kind of staff infection," by the lovely nurse practitioner, the real journey of finding out if these evil antibiotics, destined to destroy all the good and bad flora in my stomach, were actually gluten-free and safe to ingest for the next TEN grueling days...ugh.

Here's where the story gets interesting, frustrating and potentially scary...first off, I hate taking antibiotics. Now, some of you might remind me that without these little germ killers we are all potentially at risk for a myriad of horrible and deadly illnesses, and to that, I mostly agree. But my issue is with the absolute casual and "passe" attitude our country's health care providers have adopted, handing out antibiotics at-will for even the most minor of infections. This is not good and it's coming back to literally bite us. As a celiac, my first concern regarding this point however, is the vast lack of knowledge that still exists to this moment with our medical professionals and pharmacists nationwide. I can attest, after yesterday's doctor visit to a well-respected medical group and the pharmacy at a Rite Aid, that there's a huge amount of education lacking throughout our medical system regarding the simple and profound question of, "is there gluten in my medication?"

This is a serious issue and not one I take lightly. If I'm going to be prescribed antibiotics for the course of 10 days, I damn well better be 100% certain there's no gluten in the meds! The nurse practitioner I saw seemed fairly cognoscente of what celiac disease is about, and did make a call to a doctor on staff to confirm which antibiotic would be the most suitable for a celiac patient, as well as being most effective in the fight to heal my skin wounds. But as I continued to ask detailed questions pertaining to which drugs are safe and gluten-free, let's just say...I was not convinced he knew as much as he should. The next step, the filling of the dreaded prescription at the Rite Aid pharmacy. This experience proved once again, just how large the information gap is between medical workers knowing even the most basic and crucial information about what it means to have "gluten" in any medicine/drug and the need to clarify and educate them about the difference between "gluten starch" and "corn starch." Should I be OK and comfortable with this fact, given I'm speaking to an educated pharmacist? I think not. Ugh.

I'll say that this particular pharmacist did at least take the reins, calling the drug maker in New York to determine if the antibiotic was in fact gluten-free, but until he received a call back, I refused to purchase the meds. It got me thinking about the fact that it would be so much less stressful and time consuming if I had just accepted the pharmacist's "I'm pretty sure it doesn't" response and bought the meds but luckily, experience and wisdom have taught me that you must "fight your own good fight" meaning, taking charge of what it means to be a celiac in every way...even when it's inconvenient or within the realm of an intimidating circumstance. WE are the educators and must never forget that.

As the story turns out, the drug company did call the pharmacist to confirm I was able to take this particular antibiotic, and we had a conversation about the specifics of gluten hidden within a multitude of medications. He was interested and thanked me for bringing this to his attention. My take-away from the interaction...kind man, scary lack of knowledge.

The topic around which medications and vitamins are gluten-free has actually been receiving news/press coverage as of late and many of the celiac groups and foundations nationwide, including Celiac.com offer fairly comprehensive "Safe Lists" you can review before ingesting any kind of medicine or drug. About.com's Celiac Disease site also offers some good information on this topic that's definitely worth checking out, along with signing up for their newsletter, if you haven't already. Good information!

Quick Tip to follow:
"Hidden gluten in medicine is a problem for people with celiac disease. The gluten-free status of a medication can sometimes be determined simply by checking the “Frequently Asked Questions” page of the manufacturer’s website. Often a brand name medication will have its own website. If there is no information on the website regarding gluten..." courtesy of About.com.

So, as I start to heal and begrudgingly swallow two antibiotic pills each day I'll be praying that my stomach flora bounces back with the aid of some really good probiotics and a healthy GF diet. This little episode has not only reminded me to pick my feet up a bit higher when jogging with gusto, but also that education is the key towards building awareness around what celiac disease is really about and the seriousness of all it entails. The "gluten-free fad diet" news and celebrities going gluten-free is all well and maybe good (still not convinced)for getting the word out. But the bigger issue and concern here is about receiving proper medical care as a celiac patient and being treated by all medical staff, whether for a simple cold or a dreaded hospital stay, with accurate information by staff who KNOW their stuff and have a broad and capable understanding of the challenges and issues a celiac patient will face if not treated properly and accurately.

We all have a lot of work to do...let's get moving.