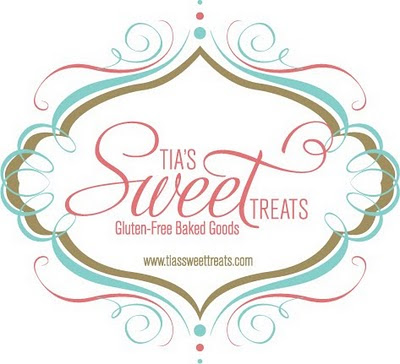 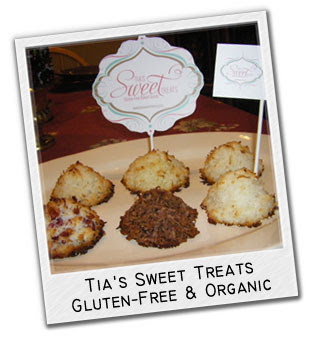 Earlier this year, a beloved, recently departed doctor friend said to me, "you know Aimee, sometimes life makes our decisions for us."...At the time, I wasn't quite sure that I understood what he was saying, but his words have stuck with me and I've pondered them intensely, coming to a deeper understanding as the time has passed.

I've worked in public relations and advertising for many years and I still love what I do, but along the way this other passion showed up in my life, through no choice of my own, leaving me with Celiac Disease and a deep desire to help others and create something good. "Good" in the sense of doing so for others, teaching those newly diagnosed how to manage living gluten-free with abundance and joy and, yes, creating something delicious to share with the world.

Today, my mother and I are really excited and happy to announce the launch of our Gluten-Free Baked Goods business, Tia's Sweet Treats!!! 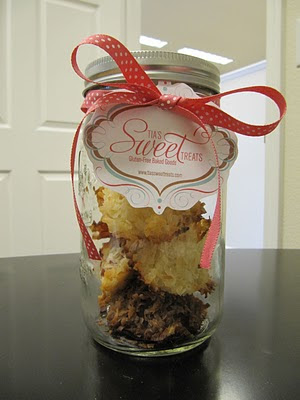 We are currently baking delicious, Gluten-Free, organic Macaroons in a variety of five flavors, all free of nuts, as well. We use only the finest, organic ingredients that are bought locally and baked in a 100% Gluten-Free baking facility. 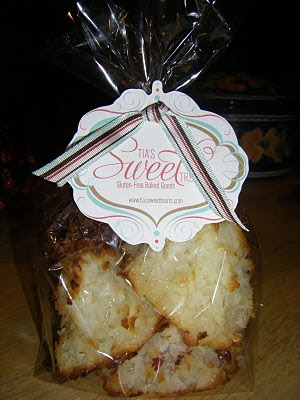 Since the first moment I tasted a Parisian macaroon in Paris, I've been hooked - though the macaroons we are baking do not look like the ones you find in the City of Lights, the essence of their tradition and taste are captured. The authenticity of our recipe and flavors are derived from a combination of my grandmother's recipe and many hours of research and taste-testing by my mother and me - Fun job, no?! 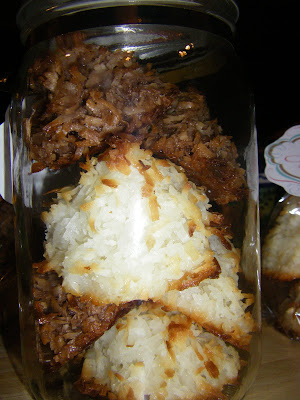 You might ask where the "Tia" comes from in our company name? Well, it's derived from the love and sweetness that is shared between my nephew and me and our love for gluten-free foods. You see, given our Basque/Spanish heritage, I wanted my nephew, Alex to call me "Tia," which means Aunt in Spanish. "Aunt" just wasn't going to cut it! Alex is also the first person in our family to be educated and exposed to gluten-free foods since he was born and as he's grown, really enjoys eating my food and loves to try everything I eat. We have always shared this sweet bond of eating gluten-free muffins and Lara Bars together - and his awareness of what I can and cannot eat is astounding to me - he's so intuitive about gluten and understanding what is safe for his "Tia" to eat. The other reason for the name...truthfully, is the sound of his little voice that's conjured up in my head every time I hear the word, "Tia" spoken...it's priceless to me and I wanted to honor Alex and our special bond in this way. 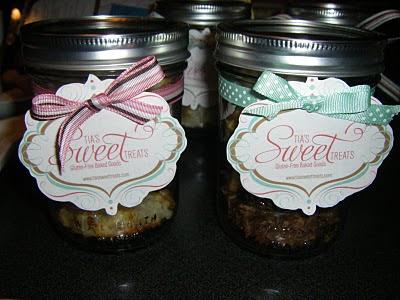 We are accepting pre-orders now and will have our full line of Macaroons available for pick-up after January 15, 2010. Please visit our website for a list of pricing and the necessary contact information or email us at: info@tiassweettreats.com.

We look forward to baking for you, your friends, colleagues, family, and other loved ones and we guarantee a safe and delicious 100% Gluten-Free experience that will leave your taste buds and tummy wanting for more.

Oh the Weather Outside is Frightful... 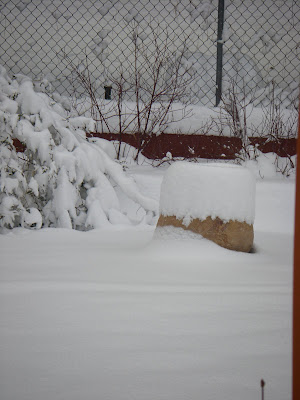 I guess winter has arrived a bit early.

Enjoy a serene and gluten-free weekend ~

P.S. - Hot tip: I had a client event today and had ordered a Gluten-free veggie baked potato from BJ's Restaurant and Brewery in Reno. They offer a GF menu, so we ordered off of that and my dear client was so sweet to triple-check my order when she picked it up...however, when I opened the potato and found a side of what I believed to be melted butter (per my request) I was shocked to realize that it was not! After taking two or three tastes, I realized that it was more of a fettuccine sauce (with most likely some flour!), not butter. So once again, don't ever 100% trust ordering off of a gluten-free menu.

It obviously always pays to stand next to the chef in the kitchen and watch his or her every move! Well, since that's not really possible just realize that there's always a risk involved.

My two hour "will I get sick" time frame is almost up, and I'm praying that I will not get sick from this mishap. My client asked ALL the right questions - it's strictly the insane lack of knowledge that most all kitchens possess when it comes to truly knowing how to serve a gluten-free customer! I could go on...but I digress.

Just wanted to pass this information along!
Posted by Bowl of Soul Gal at 2:48 PM No comments: 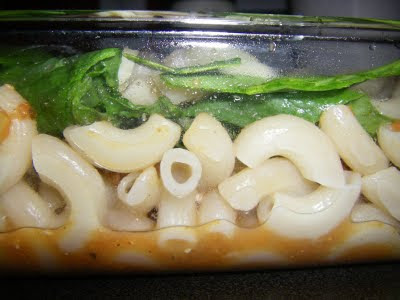 I hope that Thanksgiving left your tummies full, but certainly not sick from any sneaky gluten that may have found its way onto you plate. I was very thankful for a lovely, quiet meal with my family that was much simpler this year, safe and delicious. I have to say that my mother has really mastered how to prepare a holiday meal sans gluten in the nine + years since my diagnosis.

The Saturday after Thanksgiving I found myself at the gym running on the treadmill and burning off some of those delicious calories previously consumed on Thursday. While running and sweating, I noticed that the Food Network had a show that was running called "Ask Aida". If you haven't seen it before, it features a young, enthusiastic gal named Aida who cooks up pretty quick and simple recipes, while answering viewer questions. I have to say, she's darn good at chopping. I was a little jealous while watching how fast her technique is.

She was whipping up a bunch of pasta dishes that looked rather tasty and cheesy - yum. The third dish she prepared caught my eye, given the fact that I was still in the mood to eat turkey, having not really overindulged too much this year on the good old bird, and this particular pasta dish requires ground turkey meat. The name that flashed on the screen was the Italian dish, Pasticcio, though Aida's version is definitely not the original four-hour-intense dish; let's say this is a shortcut version. 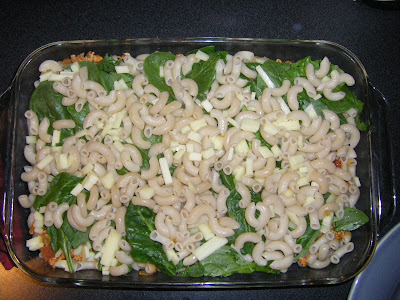 I memorized the ingredients and directions while huffing and puffing my way through the workout, and enthusiastically pledged to try this dish, making enough to nosh on throughout the week...and that's exactly what I've been doing. It's delicious. If you are looking for a warm and nutritious, lasagna-type meal everyone will love that will leave you with ample leftovers and a smile, try this modified version of Pasticcio ~ Macaroni pasta, ground turkey, tomato sauce, spinach and mozzarella. 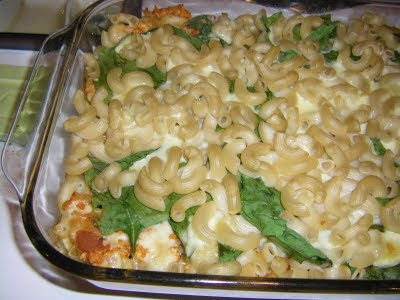 - Salt and pepper (to taste)

Saute sliced garlic and onions with olive oil until golden brown, then add ground turkey, jar of tomato sauce and cinnamon. Mix all ingredients together then turn heat to medium and simmer for ten minutes. Boil entire bag of pasta and cook until al dente, then strain and set to the side until turkey is cooked. (Tip - I always throw a few drizzles of olive oil in with my strained pasta and stir, to keep from sticking together).

Spray non-stick olive oil on to casserole dish then layer half of the pasta into the dish, just covering the surface. Layer pan of ground turkey mixture onto pasta and evenly smooth over entire surface. Layer fresh spinach over the turkey until it's completely and evenly covered. Spread 1 cup of mozzarella over spinach. Finally, evenly layer the remaining pasta over the spinach and toss on the second cup of mozzarella, e poi...finito!

Your pre-heated oven will be set at 350 degrees - cook the dish for 25 minutes. I would recommend covering the dish for the first 15 minutes to seal in the juices, then uncover to lightly brown the top.

Not only will this simple and quick dish allow you more time for all those Christmas and holiday bargains you are going to be looking for online, but the aromas it creates in your kitchen are intoxicating - you can thank me later.

Try not to eat the entire casserole dish in one sitting. If you do, don't blame me. Just head to the gym. The treadmill is awaiting your arrival.

Happy cooking ~
Posted by Bowl of Soul Gal at 8:48 PM No comments: