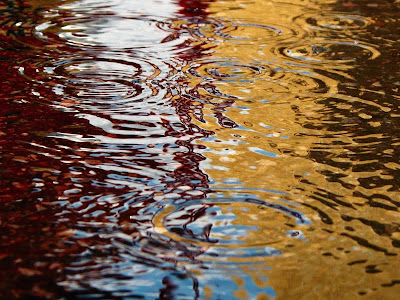 I'm definitely riding the ebb and flow of life's waves each and every day, bringing sunshine and brilliance at times, while other moments or days, struggle and darkness. This is one of those days. I could blame it on the rain and damp air, but that wouldn't be at all fair to Mother Nature who has gifted us with this abundance of moisture. No, it's the damn gluten's fault...and I'm angry and struggling to find the peace within that normally accompanies my daily journey as a Celiac - except on days like this one, when my body is fighting to make heads or tails of the enemy within.

Last night was one of excitement, laughter and joy. I haven't laughed as hard as I did in a long time during Anthony Bourdain's appearance at the Lake Tahoe Food and Wine event at Harrah's. It felt great to belly laugh, and being a huge fan of his, along with my good friend and mother who were also in attendance, it was such an exciting treat to see this man in person spouting out his true gift of lingo, humor and wit...along with his insane knowledge of travel and food.

Leading up to this fun night out, we ladies met for dinner before the show. As my friend and I bellied up to the bar before our meal, our drink of choice turned out to be virgin Bloody Mary's. My dear friend is pregnant, so I decided to accompany her choice of beverage, not ever being able to drink a Bloody Mary before due to its main, non-virgin ingredient, Vodka. We discussed the ingredients of a Bloody Mary sans alcohol, and some tomato juice, Tabasco sauce, salt and pepper with a twist of lime, some olive and an onion seemed harmless enough and a welcome treat. This is the part where I can plead no-contest, or fall back on my naivety, seriously not realizing or knowing that Bloody Mary's most likely consist of and come from a MIX in a fricken bottle that's well, full of crap ingredients. So after about four sips of this tasty drink I started to worry, believing for a moment that "this tastes too good and flavorful to be safe, is this possible?" Little did I know that 15 minutes into my non-alcoholic drink the damage had already been done. We asked the bartender at that point to clarify what was in this drink - As he handed me the bottle my eyes were immediately transfixed on the list of over 20 ingredients (and not all good, let me tell you) with the second to last being "wheat - soy" and immediately below that, an allergy listing calling out "wheat." In an instant, my heart sank far below my bar stool and a wave of panic reverberated throughout my body as I began to pray that the large amount of ice in the glass had diluted or aided my gut in some way. I immediately slid the drink away and could see the fright in the bar tender's eyes as I politely demanded a glass of red wine, which in the past has at least tempered the immediate affects of the gluten's drastic hold on my innards.

Here's where my anger has entered in today - What the hell? I mean, they put gluten/soy sauce in a simple tomato mix and after only a few sips, I loose yet another day on the calendar to being holed up in my house, reeling from an accident. This is not my pity party, it's just me being really pissed off about the pathetic lack of education in our country regarding additives and adding wheat to every product known to man, and we the Celiacs having to fight the good fight each and every second, still being accidentally poisoned while constantly on-guard. I'm just really tired of the basic garbage that is added, filled, mixed and used in the vast majority of American food products and the obscene lack of knowledge that every restaurant in this great country possesses when it comes to not killing a Celiac!

Okay, I'm ranting and allowing my emotions to write the majority of this post, but come on, aren't any of you out there feeling a similar level of disdain?! The other issue coming in to play here is that I'm frightened. After a record 14 months of zero gluten poisoning incidents, my streak has sadly ended and I am again reminded that it only takes a tiny amount of ingested gluten to send my body into a state of confusion and pain. God forbid I even encounter a large accidental dose. I'm pretty sure that would equal lights out for me.

I could summarize some thoughtful anecdote about how at least I don't have cancer or have to deal with a myriad of other horrible illnesses and that is very true, but today I'm not going there. I'm just mad. I hope you understand.