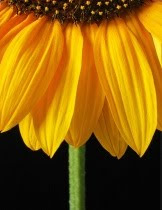 Change and growth help to make the world go round. They allow for life to spring forth and the sun to shine down upon us each and every day as our planet spins around the solar system, yet they are also the verbs (to change; to grow), that can cause pain and fear, trepidation and angst, are they not?

I've been in the middle of huge change and painful, necessary growth for some time now. There are times when life calls from the depths of our souls and though we might try to deny those faint cries, eventually, they surface and we are faced with choices, paths, and decisions. The hardest part for me is in needing to take a journey of growth that's calling, yet wanting those I love the most to come with me. To keep up…that's not fair. Growth is a journey one can only take alone, in a sense, and asking those we love to follow not on their own accord, is pushing for changes and outcomes that are not yet ours to know. I'm learning that real love is the kind that lets go, sets free and does so with only the most honorable of intentions. Yet selfishly speaking, also hoping that the ones we love might see our change, my change, and are inspired to sprout new buds of their own. It would be really nice if they were to sprout buds in a similar direction and meet again in the sun, heads turned toward the light in symmetry. One can only hope, believe and maybe inspire, knowing that in life we are all both teachers and students throughout the journey. Being mindful of that simple and profound fact is in itself, a magnificent lesson to honor.

I've learned the hard way that if we don't take a chance, step out from behind our shells, our protective armor and hiding places, then we can never truly be immersed in light. Be seen. Vulnerability equals clarity and light. It is such a hard path at times, choosing ourselves and walking forward towards the emptiness. Sometimes that's what having Celiac Disease feels like to me. You can either embrace the differences we face and jump into a life of challenges and joy, or stay stagnant on the side of the pool, treading water waiting for a life vest to be thrown in. We all tread water most of the time, but it's in the crucial moments when we choose to either reach for the end of the pool, gasping and choking and pushing our way there, or remain clinging to the wall with our safety belt on.

Having a disease that alters the way you view every morsel of food is put into your mouth, your body, is much more psychologically challenging than most can comprehend. I find myself constantly weighing the risks of eating in new locations or food prepared by someone, even in-kind whom I have to trust, knows what they are doing.

With all the new gluten-free products available on store shelves it has become "enjoyable" for a Celiac shop for food. I've become keenly aware that there's now a certain level of comfort a Celiac can acquire, stocking pantry shelves with goodies and supplies, buying take-away pizzas, baking Betty Crocker cookie mixes, you name it. It's funny to me how quickly we humans can grow accustomed to abundance and how painful it becomes when that abundance fades or is no longer available. We love ease and why wouldn't we? Transitioning from less to more is essentially how the world is set up to thrive, and as I look back over the past ten years of life living with Celiac Disease, I see clearly how growth of a product, of a line of crackers, of the gluten-free industry is propelling so many who live sans-wheat to a different level of comfort, of life. Is it better this way? Probably, but what defines "better?” In my humble opinion, as long as the new-found abundance of gluten-free products don’t cross over into “junk food,” and are able to remain true to some authentic form of nourishment, and that we Celiacs are reminded to cook fresh foods, not falling into the tundra of “frozen foods,” then what’s transpiring is better and actually, really great. Imagine being a celiac toddler who will have the distinct advantage of growing up her entire life with safe food, that’s readily available. Growth.

As my world view adapts and changes in the midst of my growing pains, I feel the instinctive need sometimes to seek shelter and rest. Then I watch a sunflower. Even when the skies are cloudy and dark they will instinctively seek the sun’s rays. Through whatever Mother Nature throws at them, they turn their magnificent heads upwards and stretch towards the light.

What could be more inspiring, more beautiful or more challenging?

Use the Force. Seek the light.

Posted by Bowl of Soul Gal at 2:41 AM No comments:

What's your first memory that comes to mind when you hear the word spinach? For me, it's the immediate picture of Popeye the Sailor man, from the cartoon with those metal cans of spinach being consumed whole by Popeye in moments of peril, when he needed instantaneous strength to ward off any evil-doers. It brings a smile to my face just remembering him gulp-ing down those cans of spinach, which always and miraculously migrated directly and immediately to his biceps, suddenly bulging to life with strength...if only the spinach I eat would offer me those same dynamic effects!

All kidding aside, I do love spinach (and kale) and try to cook it often and incorporate it into my diet through a variety of recipes. Spinach has quite a robust history for such an unassuming, flowering plant. Spinach is thought to have originated in ancient Persia (modern Iran). In AD 827, the Saracens introduced spinach to Sicily. The first written evidence of spinach in the Mediterranean are in three tenth-century works...but here's my favorite tid-bit... after it arrived in Spain, by the latter part of the twelfth century it was nick-named the "captain of leafy greens," by the great Arab agronomist Ibn al-'Awwam. Isn't that the truth, though it's going to have to duke it out with Kale first, for that title.

My most favorite way to cook and eat spinach is finding it fresh from someone's garden - No store-bought brand can really compare unless it's truly organic. Recently, I cooked up some spinach and mixed it in with some gluten-free pasta and sun-dried tomatoes for a tasty and nutritious meal. 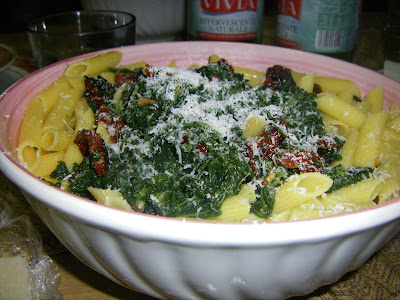 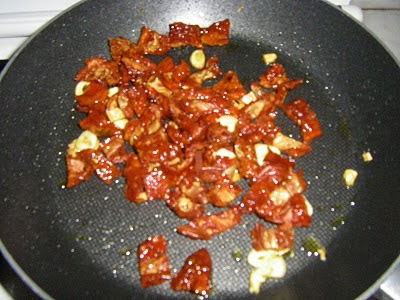 - Salt and pepper to taste

Sauté the sliced garlic in olive oil until soft then add the sun-dried tomatoes and cook until both are tender. Add spinach and some salt and pepper. Cover with lid after mixing together and let simmer until spinach is wilted and cooked down. Continue mixing ingredients while sautéing as to not stick to pan. When cooked, set aside with lid on.

After the pasta is cooked to your liking, drain, and add a dash of olive oil with salt. Then in one large bowl add pasta and the sautéed spinach mixture from the pan. Mix together and add fresh parmigiano. Serves four.

Another beautiful and nutritious veggie that I'm beginning to become more fond of is Radicchio. Its gorgeous purple leaves are so enticing and can be cooked and used in such a variety of ways, many of which I haven't a clue yet. I know it's great in risotto's and tossed in different salads to add a bit of that chicory flavor and color. It's also wonderful grilled with olive oil, which is how I like to prepare it; simple and can be served alone or serve with a roasted sausage or milder meat. 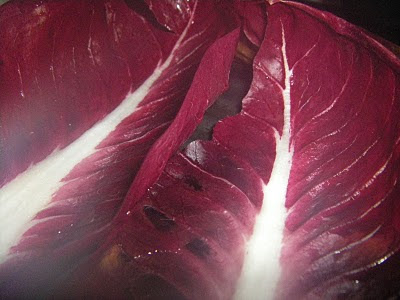 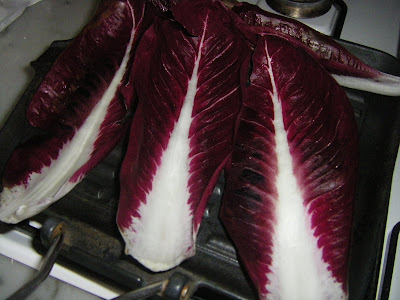 Place washed leaves onto a heated grill, BBQ or sauté pan (med-high heat). Allow leaves to wilt and brown but NOT burn. Quickly remove, drizzle with olive oil and a dash of sea salt. Serve. 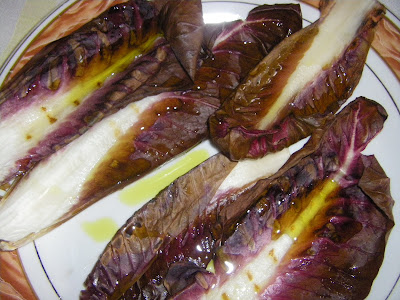 The more years that pass living life as a Celiac, the more I realize the value, nourishment and safety in cooking and eating a multitude of fresh vegetables. Bust out of your cooking comfort zone and try some new and "strange" veggies that you don't normally cook. There are truly so many colors, shapes and amazing flavors of veggies in your produce department just waiting to be picked and brought home for dinner.

Bon appétit, gluten-free style!
Posted by Bowl of Soul Gal at 7:44 AM No comments: