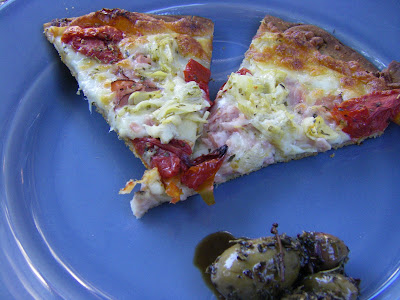 After our Triathlon last weekend, my body was longing for some carbs. I had been told by someone at the Whole Foods deli counter last week that they were now making gluten-free pizza dough (rice) and pizzas made-to-order. Wow. My world just became a little bit brighter.

We decided to give this pizza a try, so I went to the Whole Foods pizza counter and spoke at length with one of their employees. He told me that the dough is made of rice flour and is 100% gluten-free. They are creating 10" rounds that come standard with mozzarella, and then you have three pizza sauces to choose from. The pizzas are custom made-to-order at the counter, and can either be baked at WF or you can take it home to bake in your own oven, which I did. The dough can also be sold separately, so customers can simply take it home, roll it, dress it with toppings and bake on their own. I was told that they keep the dough in a separate area and went to another kitchen in WF to prepare the pizza. I opted to take the pizza home and bake it in my oven which I know is 100% gluten-free. Our WF here in Reno is doing a great job stocking a lot of gluten-free items, however, they state right up front that they are NOT a gluten-free facility, so you always have to keep cross-contamination in mind.

I would like to further-research where they are baking the GF pizzas; are they in the same oven as the regular flour-dough pizzas, or have they designated a separate oven? So until I have that answer clear in my head, I'll keep baking them at home. And the price - it was very reasonable. Surprisingly, our 10" with three toppings (artichoke hearts, sun-dried tomatoes, and ham) and the choice of garlic/tomato sauce with mozzarella was only $15.00. I've purchased GF pizzas in San Diego that were only 8" and ran somewhere in the $20-something range...so this was also a pleasant surprise, and dangerous...I have to ration my pizza runs now! 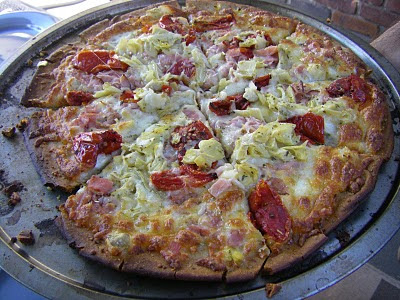 The pizza was quite delicious and I enjoyed the crust - I bake my own pizzas, creating the dough at home via an easy recipe I posted last year, but this crust had a lovely crispness to it - and held it's form quite nicely. The toppings were fresh, healthy and I really liked the taste of their mozzarella cheese and the way it bubbled and cooked to a yummy "real pizza" consistency, especially around the crust. So yeah, it was a little bit of Heaven and felt like a real treat to go order a pizza at the counter, shop for 20 minutes and pick it up...dare I say, it kind of felt "normal"...

I would like to hear from those of you who give this Whole Foods pizza a try and hear what you think about the quality, consistency, toppings and price.

If this weekend's heat and lazy summer attitude prevents you from whipping up a storm in the kitchen, you now have the option of a quick and delish pizza - all you really need to do is pick some fresh lettuce and veggies from your backyard garden and drizzle on some olive oil and balsamic!

Happy Summer eating~
Posted by Bowl of Soul Gal at 10:51 AM